Where better to relax for the New YearMore and more Russians go on New Year's holidays on a journey - in their own country or abroad. The meeting of the familiar home, family holiday outside the walls…

Visiting God: the tallest skyscrapers in the world

To see distant horizons from a height and look down upon clouds and birds – for some reason this attracts many. Maybe that’s why the legend of the Tower of Babel arose. And when technology allowed, man began to create what brought him closer to the sky – skyscrapers.

Every year, megacities of the world compete in the construction of their “towers of Babel.” For example, on March 30, the Tokyo Midtown Tower opened in the Japanese capital. An architectural masterpiece 248 meters high – the highest in Tokyo, which is already famous for its skyscrapers – is located in the Tokyo district of Roppongi. In the new center, tourists can not only make purchases and eat delicious food in 130 shops and restaurants of the tower, but also if they wish to settle in it. END_OF_DOCUMENT_TOKEN_TO_BE_REPLACED 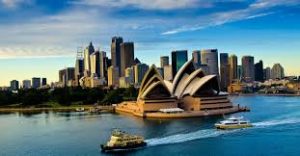 Australia is a paradoxical place, full of strange, unlike anything else. To begin with, one of its youngest countries is located on one of the oldest existing continents of the world. Moreover, this is the only state that occupies a whole continent and “by land” does not border any other. Compared to Europe, Australia is the least populated part of the world, with 2.5 people per 1 square kilometer. On vast uninhabited territories the most ancient mammals, marsupials, almost unchanged over millions of years, live. Wild jungle encircles coastal areas, and penguins and seals splashing here from capes at the southern end of the mainland swim from Antarctica … END_OF_DOCUMENT_TOKEN_TO_BE_REPLACED

Export bansTourists often pick up all sorts of interesting objects on land, on the shore and in the sea that you want to bring as a keepsake - but you can’t!…

Crocodile lunch among eucalyptus treesFrom Russia to Australia fly eighteen hours, with two transfers. This is if you choose a shortened route - through Tokyo. And if you get to the fifth continent via…