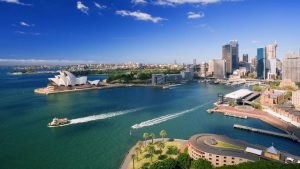 Australian real estate agents joke that the Sydney luxury housing market is now as hot as the Olympic flame, which is supposed to light up the sky over this city in 2000. Thanks to the advertising that the upcoming Summer Olympics made to Sydney and the low interest rates on loans, the activity in the market for the most expensive apartments is now many times higher than in previous years.

Most of the indigenous Sydney live in the southern and western parts of the city – there are mainly concentrated cheap and moderately expensive facilities. More expensive housing, which is mainly bought by foreigners, is located along the coast north of the center. The outskirts around Double Bay, where the most expensive objects in Australia are sold, can also be included in this category.

In the past 12 months alone, prices for “exclusive” living space in the largest city on the green continent have jumped 14.9 percent, especially in the areas surrounding Sydney Harbor. The echo of the price explosion in this epicenter of demand, in a somewhat weakened version, is reaching the city outskirts.

Of the latter, buyers are currently most active in Cremorn, Kirribilli, Mosman and Neutral Bay. In Homebush, the area where the future Olympic village of 2000 will stretch, real estate price growth since the announcement of the venue for extra-class games amounted to as much as 90 percent. With a huge number of people who want to buy a house by the sea or an upscale apartment in a place where a lot of money will be made in a couple of years, the offer is very limited.

Sydney, in calm times, received more than three and a half million tourists a year, and on the eve of the Olympics the flow of visitors will increase many times. The lowest level of interest rates on loans over the past 20 years contributes to hype. Only this can explain the fact that over the past four years, 9 penthouses have been sold in Sydney for the price of $ 3,000,000 and more. And last summer, a record was set for this kind of premises – in August one of the penthouses “left” for $ 5.500.000.

A luxurious four-room apartment in a prestigious residential complex in Neutral Bay with two bathrooms and a view of the water surface of the bay can now be rented for $ 1,500 per week. This apartment is ideal for businessmen staying in Sydney – the house is located just 3 kilometers from the metropolitan business center. A third of the cost for renting a four-room penthouse in Kirribilli, from the windows of which you can see the world-famous building of the Sydney Opera House – $ 1.000 per week. Experts believe that the “pre-Olympic” market is now at the peak of demand. Property prices in Sydney are growing faster than inflation – the gap is 4-7 percent. In the future, high-end housing prices may drop in some places, but expecting a general stabilization before 2000 is clearly not worth it.

Death in Venice - Life in AustraliaUnconventional sexual orientation today has ceased to be a cause for criminal prosecution. But it is still annoying the masses who are not familiar with Thomas Mann’s short story “Death…